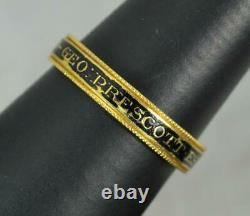 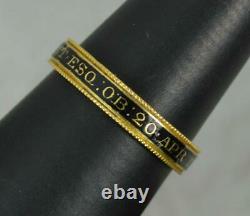 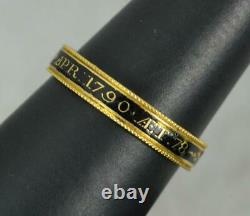 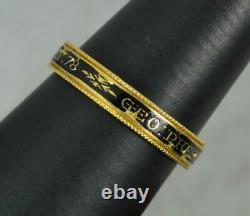 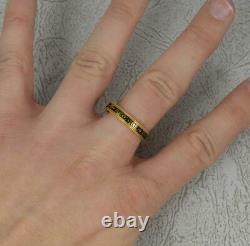 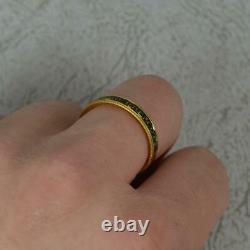 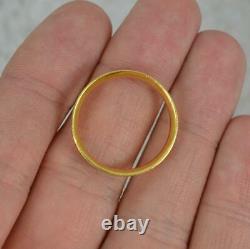 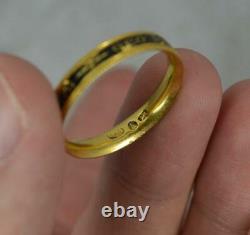 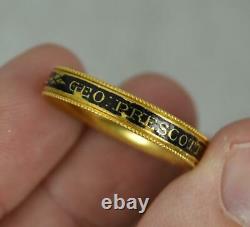 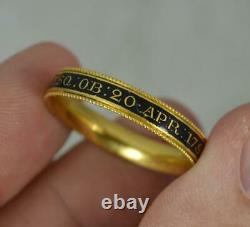 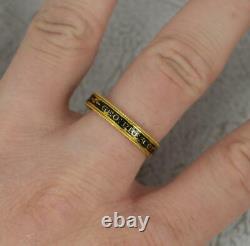 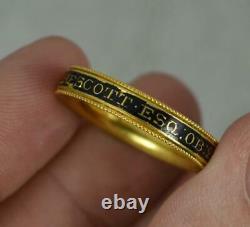 The band to read; Geo Prescott Esq, Ob 20 April 1790 aet 78. Please see below for additional interesting information and research regarding George Prescott Esquire. Some chips and wear to the enamel as you would expect with such a loved piece. SIZE ; R 1/2 UK, 8 3/4 US.

HALLMARKS ; Kings head, lion, makers marks. George Prescott was born in around 1712, the second son of George Prescott and his wife Anne. His father was a merchant in Chester and was also a partner in several leadmining enterprises in Wales. After completing his schooling, George Prescott was sent by his father to work for a French Protestant merchant, Monsieur Raguoneau, in Livorno, Italy. During his time in Italy he formed links with a number of the prominent English noblemen who lived or spent time in Rome. George Prescott continued in the Italian trade after his return to England, and in 1746 was a member of the committee of London merchants who appealed to the government about the increasing number of trading ships being captured. George Prescott served as whig member of parliament for the seats of Stockbridge, 1762-7, and Milborne Port, 1772-4. In parliament, he was known for his extensive first-hand knowledge of commerce and finance. He was regularly consulted on matters related to his areas of expertise, and spoke on business connected with international trade. On 1 January 1766 George Prescott joined with the Hamburg merchant Andrew Grote, William Culverden and John Hollingsworth to form the banking partnership Prescott, Grote, Culverden & Hollingsworth. Their new firms success was greatly aided by Prescotts many trading contacts from Italy, as well as his political status and connections. He remained in the partnership until his death in 1790. George Prescotts first wife died in childbirth. His second wife, Mary, was the daughter of Jacob Elton, a merchant of Bristol, and the sister of Isaac Elton, one of the original partners of Bristol bank. George and Mary had three children together. In 1763 Prescott bought the manor of Theobalds, Hertfordshire, from the Duke of Portland. There, Prescott built a new Georgian mansion, Theobalds Park, which became his family residence. As we keep stock off site please allow one or two days to answer any questions or queries you may have. Please note all rings come with a free jewellery box, though this might not be the one in any photographs shown. Various extra enlarge photographs and good detailed descriptions from an experienced antique, modern and jewellery dealer.

This item is in the category "Jewellery & Watches\Vintage & Antique Jewellery\Vintage Fine Jewellery\Pre-1837". The seller is "dealbetweenus" and is located in Cheshire. This item can be shipped to all countries in Europe, United States, Japan, Canada, Australia.